Internet has been the catalyst for ushering in the digital revolution, since it was opened up for wide-scale public use in the early 90s. Its impact can just be highlighted by the fact, that it has reshaped the economy of many nations, both small and big, developed and developing worlds.

Decades later, Internet is still running strong largely with the same set of core protocols, that were originally designed and implemented at its beginning. This speaks volumes about the design principles behind those protocols.

Currently we are at an interesting phase, where billions of devices are expected to be on the Internet along with couple of more billions of users to be added - all within a decade. As the 'net' expands its obvious that crimes too - minor to major - get shifted to the new connected world, paving the way for regulations and governance as the norm.

It is at this juncture, that we need to thoughtfully look at how the next generation protocols are shaping up, echoing the same design principles that brought us here, and taking into consideration of safety and freedom of our next generation.

Following is the illustration of the legacy vs current Internet protocols, leading us to discuss about the next-generation. Few questions that emerge are:

1.Will the layered approach be smashed

4.Warding the Internet from Cyber-wars . 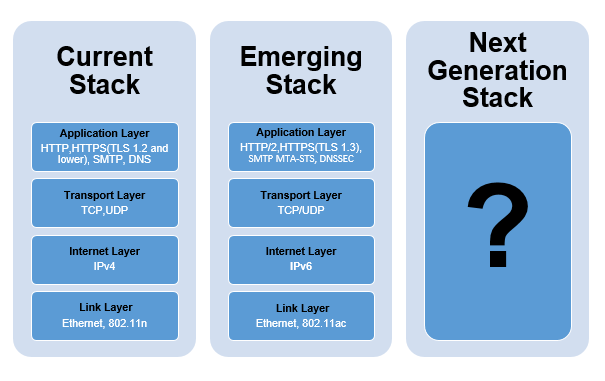